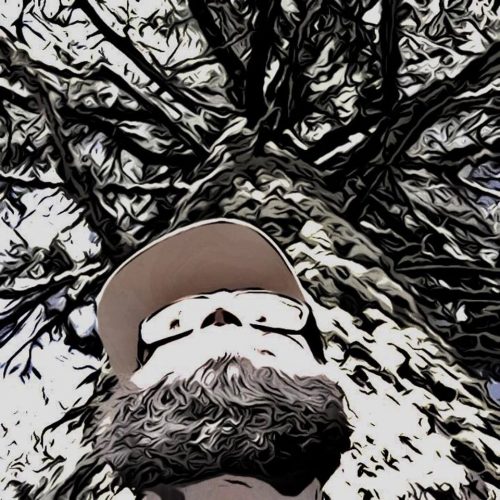 Mad respect on your latest Album release “The Basement” . We checked it out and really enjoyed the new underground sound & perspective coming out of Missoula, MT. We rarely come across Hip Hop artists from there. What motivated you to create this style of music. And how did you come up with your MC name Dougie Fir?

I moved to Missoula in 2009 from Chicago. I was sick of the big city scene and it was honestly taking a toll on me both physically and mentally. I ended up working with The Montana Conservation Corps and the United States Forest Service doing trail work and fighting fires. It took me all over the mountains of the Northern Rockies. I slept in the woods more than I slept at home for a long time so I was feeling pretty one with the trees. I would lay in my tent listening to beats and write rhymes and it just kinda came to me. A Douglas fir is a kind of tree. They’re hella common out here. I’ve prolly cut thousands of them out of the trail in my life. It just fit.

Tell us a bit about your city. We honestly never heard of it. How is the underground scene out there?

Hahaha I appreciate the honesty. Missoula is a dope little city in western Montana. It’s nestled in the valley at the confluence of the Clark Fork and Blackfoot Rivers, surrounded by the Rattlesnake and Bitterroot Mountain Ranges. Big outdoor recreation scene for sure and skiing is a way of life for me as well, but the city is also really into its art and music. When I first moved here I started calling it the little city of big dreams. There’s live music everywhere. Local and tours. Lots of artists stop here on their way to Denver or Seattle so we get some cool shows. The hip hop scene definitely doesn’t get as much love as the bluegrass scene around here but really all the musicians and artists support one another. My homey Tonsofun, who’s featured on the track Numinous organizes a bunch of hip hop shows around here. Well, did, before the Covid, but he set up a lockdown show on Instagram Live that artists from all over Montana took part in raising money for relief so that was dope.

How are you dealing with this whole nationwide lockdown due to Covid-19 CoronaVirus? Has this affected your music career in any way?

Like I mentioned above I did a lockdown show on Instagram live. I performed a couple tracks off the new album as well as my first album Wilderness. Other than that though the Covid has definitely put a damper on the live music scene. I’d love to be out doing shows right now, but that’s just not in the cards for the time being. On the other hand it gave me all sorts of time. So it affected it but not necessarily in a bad way. I got laid off from my job in February because of covid and that’s really what afforded me the time to finish writing, recording and producing The Basement. I was either skiing or working on the album all of March and April.

Who are your biggest Hip Hop influences?

Early on I was really into Guru and Tribe, Heiroglyphics, Del and a bunch of stuff that I picked up on from my friends older brothers when we’d be out skating. Being from Chicago I got mad love for JUICE too. His flow is sick. Then it was like 97 or something and Atmosphere dropped Overcast. I think he played at the Fireside Bowl on the northwest side of Chicago. That shit changed my life. I had never heard anything like it. Slug’s obviously changed styles over the years, but that album was so raw. Rhymesayers was about promoting the culture and saying fuck you to the record industry. I mean they started their own record label. I love that. They were on some other shit. And that first Typical Cats Album. So dope. I also share a birthday with Madlib and pretty much love anything he’s up to.

You recently dropped a new Album “The Basement” across all streaming platforms! Please give us some background on that project!? Could you tell me the inspiration behind the project and artwork?

The Basement is aptly named because my life was literally and figuratively in a basement during the course of the creation of the album. A couple winters ago I came home from visiting family in Chicago to find out my girlfriend had gone and resigned the lease on our home without me and was kicking me out. I wound up in my buddy’s unfinished basement in a pseudo room. It had a wall separating it from the rest of the basement but the wall actually teed up the window (porthole) and split in half. It felt pretty dismal. My job with the USFS started in late April and I moved into government housing. Soon after that, I no longer worked there (a story for another time) and I was without housing. Started helping a homey flip a house and slept on the floor of the basement in my sleeping bag. There was new carpet so it was a step up in the world. And you couldn’t beat the commute to work. Got some scratch together and found a nice little basement apartment on the west side. I’m still kicking it down there. So as I said, The Basement is aptly named.

The artwork on the album is the same as the first album Wilderness, but with a different color scheme. It’s a giant Doug fir I found way out in the depths of the Selway Bitterroot Wilderness. Over a hundred years old. Just sitting on this hillside 25 miles from the nearest road. Only one other person knows where it is.

How does social media play a role in pushing Dougie Fir music.

I got a love hate relationship with social media. Like I love to hate it and I hate to love it. The music is prolly the only reason I keep it around though. Seems like you gotta do it these days and it can be a great way to reach people and find people but it definitely feels like a chore sometimes. I ain’t got no marketing and promotion team ya know hahaha. But social media or the internet has definitely afforded lots of opportunity to collaborate with people you might not meet otherwise. In the end though I think its all about the live show. If you an MC you gotta be an MC.

What are a few different moves you’re making for 2020 when it comes to your music career?

Hopefully get to do some shows later this year. I may just have to buy a whole sound system and start playing shows out in parking lots or something. Other than that though I got a few projects in the works. Got a lil solo EP I’ve been working on as well as an EP with AM SCUM outta Chicago. Always writing songs these days so another full album will start to take shape.

We have to ask, with all this social discourse and revolt in the USA, protesting and rioting, exposed police brutality toward blacks and BLM, how do you feel about this? We would love your perspective on the climate we are living in right now?

It feels really tense out there right now. I was so angry for a bit. Couldn’t even talk about it. But I’m trying to move forward and have conversations. Speak out in peaceful ways. But the conversation needs to continue until things change. We need to take the energy and build positive change with it.

Our most popular question….What is your definition of “Underground Hip Hop”?

I mean on the surface maybe it means you don’t have a record label or something, but I think it’s more than that. Not having the record label and not catering to anyone promotes individuality and realness. For me I think it’s the realness of it. If you’re talking some shit that’s real it’s gonna show in your music. If you’re respecting the culture and harnessing your craft whether you’re an MC a DJ a graf writer, a bboy or bgirl it will show. Whether you got a record deal or not I wanna hear some real shit. Whatever that realness is in your life is what I wanna hear out of any MC I take the time to listen to. That’s what it means to me.

Where can our BLOG audience find your music and follow you on social media?

Fosho, gotta shout out my Mom and Dad firstmost. Love you. My girl Mary. Love you. Shout out AM SCUM, SpaceCase, Hope is Dope. Shout out Tonsofun and Wormwood. Shout out Ratchet Rob, Stone, Shreddy Jon, Mack, M Liddy, Dave Bozone. All the Producers on the album, Nayz, Daga Beatmaker, Premise on the Beat, BluntedBeatz, Beatjoven, Amethyst Rxckstars, Alasdee, Syndrome. Shout out Montana Conservation Corps Western Wildlands and Bobby Grillo. This album wouldn’t be here without all y’all.