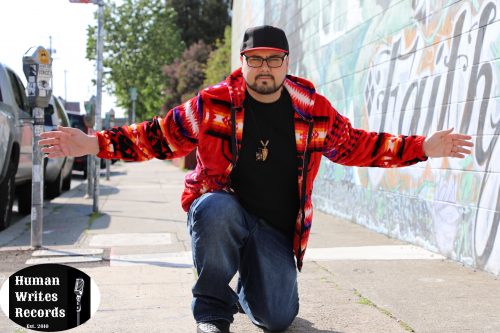 Congrats on your latest single “Freedom” featuring the Legendary Ras Kass. This track is really a breath of fresh air, in these troubling times, we definitely need some good quality Hip Hop to help us cope with this exposed injustice! How long have you been a Hip Hop Artist? And how did you come up with your DJ name Free Leonard?

I made my first beat in 2001 using some generic software I found on the Internet. Sampling defines Hip Hop music but I’m more passionate about writing. Back then my folks and I would freestyle for fun. Since I first learned basic grammar I’ve had a passion for writing, trying to paint a picture using language. As I got better with studying semantics and the differences between my tribes Ojibwe language and English, I would soon understand how expressions and emotions played their role, not to mention words that are in one language but are not in another.

My comrade Tenfold nicknamed me “DJ Free Leonard” after I released the 2010 compilation “Free Leonard Peltier: Hip Hop’s Contribution To The Freedom Campaign” which ranked #192 on the ITunes Top 200 and a few years ago was being sold by third party companies for $600 per cd.

Tell us about your first Hip Hop memory?

In elementary school hearing Kris Kross “Jump” on the radio and Warren G’s Regulators song being mimicked by friends on the playground.

What was the first piece of production hardware you ever purchased? Also, what is your preferred equipment for production?

I have been DJing at local community events since 2006 and these days I use a Pioneer controller and serato. Peep the few playlists available on my Spotify right now. I have my own production and event hosting company called “Raise The Volume”, As for Sound Design I started with an Akai MPK 25 using Reason 4 software. Very basic and limited but it’s not about the equipment, it’s about how you harmonize with it. Similar to literary devices, theologies and politics. lol.

So let us know a little bit about your city and the underground community out there?

I was born in Oakland, California on West Macarthur and Broadway at Kaiser Hospital. I spent summers in the Dimond District which is Fruitvale and Macarthur blvd, sweeping the floors of an Auto Repair shop as my dad worked on cars. I also worked at Dimond Parks and Recreation for 5 years. Oakland is known for Hip Hop greats like MC Hammer, Richie Rich, 3X Krazy, Living Legends and Hieroglyphics. In High School, I signed up to do promotional work for Get Paid Records. They sent me a box of promo material that I passed out around school. In Junior College, I started doing promo work for Bicasso of The Living Legends and filmed their 1 hour long concert on stage in Santa Cruz. I also got to go to their photo shoot in Las Vegas for the single they put out from Almost Famous album. These early days help give me the structure to understand how to do things independently. The Legends are cool because they were different in the sense you could go up to them and have a conversation without having to be somebody of prestigious notoriety. To this date, I’ve done 4 songs with LuckyIAM of Mystic Journeymen, 2 songs with Eligh, 1 song each with The Grouch, Aseop and Bicasso. Also myself and Bicasso have participated in a few Sweat Lodge Ceremonies which is an Indigenous Spiritual practice.

How are you dealing with this whole nationwide lockdown due to Covid-19 CoronaVirus? Has this affected your music career in any way?

I would like to send prayers and good energy to everyone who has been affected directly or indirectly. I have been fortunate for my family and I to have avoided this pandemic thus far. I had shows in Canada that got canceled and I stopped planning my own events here in the Bay. If you are in need, please contact me. Also, as Natives, we believe you can not control Nature, let’s remember that when all the scientific solutions start to appear. The least noted variable in the experiment usually becomes the biggest concern in the long run.

Who are your biggest Hip Hop influences?

You recently dropped a new single “Freedom”, tell us the backstory on how you were able to lock in the West Coast GOAT himself Ras Kass? What motivated you to produce this track?

I met Ras Kass at Rock The Bells as he appeared in a documentary I was co-hosting called “Free Leonard, Free Em All”. We have a few mutual friends that always speak very highly of him and for those of us that actually listen and study the lyrics, it would be hard to find anyone as lyrical as him to do a song with. As for the song “Freedom” I wrote and performed the 2nd verse. I got the beat from Tone Jonez after seeing one of his Instagram ad’s which directly led me to his beat page. My guy DeeSkee engineered the record. I was motivated by the urgency to Free Leonard Peltier, my 1st cousin who has been falsely imprisoned the last 44 years. For more information on the case of Leonard Peltier, check out the new Podcast called “Leonard: Political Prisoner” on Apple.

We have to ask, with all this social discourse and revolt in the USA, protesting and rioting, exposed police brutality toward blacks and BLM, how do you feel about this? We would love your perspective on the climate we are living in right now?

Black Lives Matter is necessary because it shows the popular opinion is equality and justice which makes all the white supremacist feel unconfortable and nervous that things are changing. But we need change in the Justice System first and foremost. A concern I have is how did BLM start and who financially benefits from it as if it was sponsored by the same powers who motivate the political designers in the first place, then that would be contradictory to a People’s lead organization like The Black Panther Party for Self-Defense and American Indian Movement in the 1960’s and 70’s. I have a line in a song that goes “When observing a Cause, see whose laws it’s serving”, which is a good way to analyze things. My old mentor once told me not everything is either good or bad, it’s usually somewhat of both.
Also, we have to be aware of a “Reductionist” mentality which always makes things appear in their least amount of worth, especially when it comes to each other!!!!

What are a few different moves you’re making for 2020 when it comes to your music career?

Being transparent and providing a connection for American Indians to reclaim and reconnect to our heritage, land, traditions, to “decolonize” and return to the essence. I am also starting a weekly video journal that breaks down Indigenous Meta-Physics(Elders Wisdom) weaved in with personal stories of being on the Hip Hop scene. I wanted to help Indigenous people but first it starts by how we are thinking about unlearning from Colonized Schools and then practicing what we know as far as traditions goes.

Our most popular question….What is your definition of “Underground Hip Hop”?

With the rise of social media, underground hip hop is no longer because now an artist can reach the world. In a musical sense, it means to be uncompromised and to have integrity to Culture, Art and the People, in general.

Where can our BLOG audience find your music and follow you on social media?

Vote for Leonard Pelier as Vice President alongside Gloria Lariva for President in 2020!! Visit their web-site at- www.larivapeltier2020.org
My official web-site: www.HumanWritesRecords.com @DJFreeLeonard on IG

Any Shout Outs?
Yes, shout out to my mom who is recovering from Cancer and was a Missing Indigenous Woman growing up. Free Leonard Peltier and Free All Political Prisoners of War.  I would also like to shout out all my family members including my sisters. We are all related.